What does it mean that our hearts radiate energy and how can this influence our lives?
New technology and a deeping understanding of how the body works have shown that our hearts are not a simple pumping machine used only for transporting blood around the body.  The heart is considered part of the hormonal system of regulation in the body and directly inffluences many if not most systems.  Along with this the heart radiates an electro-magnetic field that reaches far out from the body and can influence those around us or even persons at a distance.

This implies that how we feel and what we think can alter the frequency of energy from our hearts for better or worse.  This means you should always be happy and think good thoughts. If that is not possible for you then people won't like you. There are companies that will take your money in exchange for tips on how to improve your heart energy. I have no idea how to do it so research is suggested.
As a neuromuscular pump the heart has extraordinary power for an organ which weighs only 11 ounces…enough to move 2000 gallons of blood through an estimated 60,000 miles of blood vessels every hour. This physiological function brings blood and blood borne nutrients to all cells, and it also carries cellular waste products on to their destinations for recycling or elimination.

The heart transmits electromagnetic information to all cells via the blood which carries this electromagnetic impulse 3 times faster than air. This same radiant heart electromagnetic field also broadcasts for a distance of 10 to 20 feet away from the body. Obviously, such a powerful emanation completely permeates all of our body’s cells, sub-cellular structures, and the DNA.

In addition to this electromagnetic field effect which the heart has on all cells, the heart also projects its biophysical pulse pressure wave to all cells and this energetic assists in cellular synchronization in all organ sites. Other heart functions, discovered in the mid 1980’s, have led to the heart being classified as an endocrine organ due its secretion of atrial peptide as well as the catecholamine neurotransmitters dopamine, norepinephrine, and epinephrine. The heart also secretes as much of the “love hormone” oxytocin as the brain does. Thus, the heart is a neural, endocrine, and vascular organ. It is also an organ of supreme energetic significance in our lives.
Compared to the electromagnetic field produced by the brain, the electrical component of the heart’s field is about 60 times greater in amplitude. The magnetic component is approximately 5000 times stronger than the brain’s magnetic field. The power of these electrical and magnetic field projections allow for the fact that the heart’s energetic propagation can be detected at distance away from the body.
This field of energy has been measured using a type of magnetometer known as a super quantum interference device (SQUID). This device was developed by J.E. Zimmerman and was first used to measure bio-magnetic fields in the late 1960s and early 1970s. The heart emanates the strongest of the fields which can be detected from individual organs. If we had more sensitive instrumentation than the SQUID we would probably be able to measure an individual’s heart electromagnetic signature at greater distances, or even at infinite distances in the quantum field.

Interestingly, the eyes emanate the second strongest energy field projection away from the body. The eyes transmit quanta packets of information and intention, which is known as ideoretinal light. This reality gives rise to the expression known as the power of the gaze, or, the power of the glance as well as other expressions which imply intention such as, “if looks could kill.” We also experience a jolt of excitement and love when we perceive someone blessing us with their eyes.

The field of life which surrounds us is felt to be toroidal in its configuration. Our body is held in the heart’s electromagnetic field which also emanates as a toroid around our body. The heart’s toroidal emanation is thought to be entangled with all levels of multidimensional creation, universal consciousness, and Source energy.

In 2005 I heard Deepak Chopra describe this entanglement effect as “a-causal, non-local, quantum mechanical inter-relatedness.” He was saying that consciousness is without cause (is self creating), is in all locations at all times, and is wrapped up with itself, inside of itself, as itself, in an infinitely fractal manner. Non-local correlation implies that everything is correlated and synchronized with everything instantly. In this consideration, time and distance are not linear. Time and distance are circular and holographic. One part (holon) of a hologram contains the whole which recurves into itself infinitely in all of its parts…in infinite dimensions…worlds without end.

A more practical distillation of these lofty descriptives and mind expanding concepts is to just ponder the question, “What is God’s idea of Itself as my life?” In contemplation of this question we begin to align with Creation and we become co-creators with this process. This co-creation occurs via the workings of the heart. Developed as such, the heart becomes the organ of conscious alignment with Divinity.
The electromagnetic informational effect of the heart was first pondered when heart transplant surgery became more developed in the 1970’s and 1980’s. The heart’s field effect is such a force of communication that in heart transplant recipients the heart communicates with the brain via an energy field rather than through a nervous system. Despite all nerves to the heart being severed in heart transplantation, the transplanted heart sends messages from the donor heart to the recipient brain such that many heart recipients have taken on personality characteristics of the deceased heart donor. This phenomenon is well documented and has eclipsed anecdotal consideration. 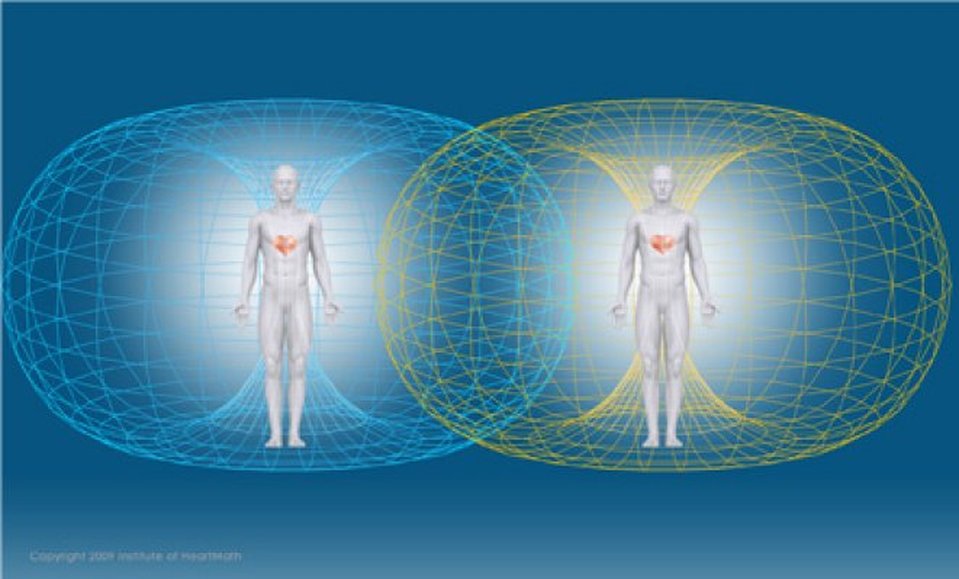